Various factors affect the measured acidity of sidechain and backbone groups in proteins, from hydrogen-bonding and salt-bridges to solvent accessibility. This mini-review highlights a few papers that have investigated the topic of micelle- and membrane-induced pK shifts.

pK shifts are only meaningful when compared against a meaningful reference. For biomolecules, these are typically pK values in an aqueous (H2O) environment, and for proteins, ideal amino-acid and small-peptide values are commonly used as baseline values. In folded proteins and in membranes, electrostatic interactions, dipolar interactions, hydrogen bonds and differences in the environmental dielectric constant (ε) change the measured pK values of titrable groups, and comparing to reference values can be useful in characterizing these different contributions. Nozaki and Tanford 1 published a now classic reference for idealized pK values of small model compounds–see table III. A more recent reference 2 uses potentiometric titrations of pentapeptides. 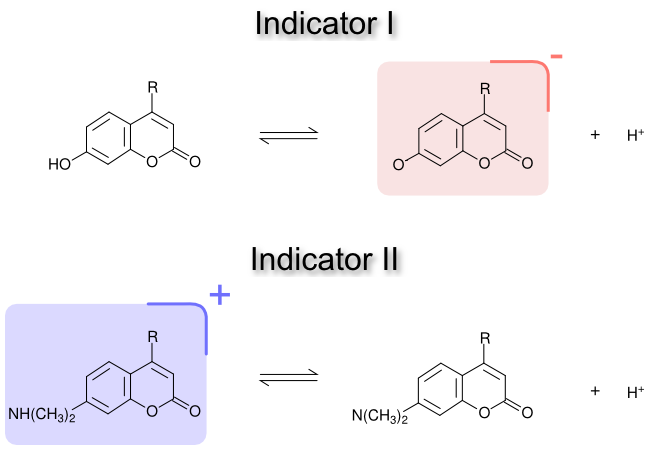 The pK of these two indicators was measured in water and in Triton X-100 (neutral), CTAB (positively charged) and SDS (negatively charged) micelles. For the neutral micelles, they found that the indicators experienced a change in ‘interfacial’ pK, ΔpKi, between the water-soluble and micelle-soluble forms :

The change in pK depends on the chemical potential of the base in micelles (\(\mu_B^m\)), the base in water (\(\mu_B^w\)), the acid in micelles (\(\mu_A^m\)), and the acid in water (\(\mu_A^w\)). They found that in micelles, the dielectric constant is lower than in water (\(\epsilon=80\)), which destabilizes charged species. For indicator I, the lower polarity in micelles increases the chemical potential for the base (\(\mu_B^m\)), which increases the observed pK. Conversely, the lower polarity in micelles increase the chemical potential of the acid of indicator II (\(\mu_A^m\)), which decreases the observed pK. Remarkably, the shift in pK for the two indicators is of the same magnitude, but of opposite sign : indicator I has a pK shift of +1.1, and indicator II has a pK shift of -1.1. Conducting these titrations in dioxane-water mixtures of known dielectric constant, they estimated a dielectric constant of ~32 for these indicators in the neutral micelles. The dielectric constant, of course, changes depending on the depth within the micelle or membrane, and so will the size of the polarity shift in pK.

Other micelle-induced pK shifts in the literature

A number of polarity pK shifts have been measured in the literature for biomolecules. Tsui et al. 4 studied the shifts in pK for the phospholipids PS and PE in PC membranes. The PS head-group carboxylic acid, a type I group, has a pK of 3.6–nearly 1 unit higher than the reference value for phosphoserine. The PS and PE head-group amines, which belong to the type II group, have pKs of 9.8 and 9.6, respectively–about 1 units lower than the reference values.

The pKs of proteins bound to micelles have also been measured. A negative shift in the pK for the (type II) amino-terminal group of a peptide bound to POPC has been reported 5, and pK shifts of 0 to -1.1 units have been observed for the (type II) histidine in small peptides bound to DPC 6.

What about charged micelles?

Micelles and membranes with a net surface charge introduce a second pK shift that is electrostatic in nature. SDS, for example, has a negative surface potential due to its sulfate head-group. This negative surface potential destabilizes the base of indicator I, which increases its pK, and it stabilizes the acid for indicator II, which also increases its pK. The pK shifts in SDS for indicator I and indicator II are +3.4 and +1.2, respectively, which include both the electrostatic and polarity-induced components. If the polarity contribution is subtracted from these numbers–assuming the dielectric in the micelles in ~32–then there is an increase in pK from the electrostatic contribution of +2.3. The analogous experiment with CTAB shows a negative shift of the same magnitude. Charge densities in native membranes, however, tend to be much lower than they are for these charged micelles–see Ref 4.