The core of my note taking style works around dates and projects. Days are written in the YYYYMMDD format–20111025, for example. This format increases in the last digits of the number, and it ensures that files and directories created on a computer are easily sorted by date.

Every day can have one or more projects which begin from the letter ‘A’ and increase alphabetically. So the first project of the day would be 20111025A, and the second would be 20111025B. A project can either be a sample, a solution, a protocol–such as a column purification–or an experiment. Within each project are the individual steps, starting from (1), (2), and so on.

This is best illustrated by an example. Suppose I have 25mM Tris buffer to make: 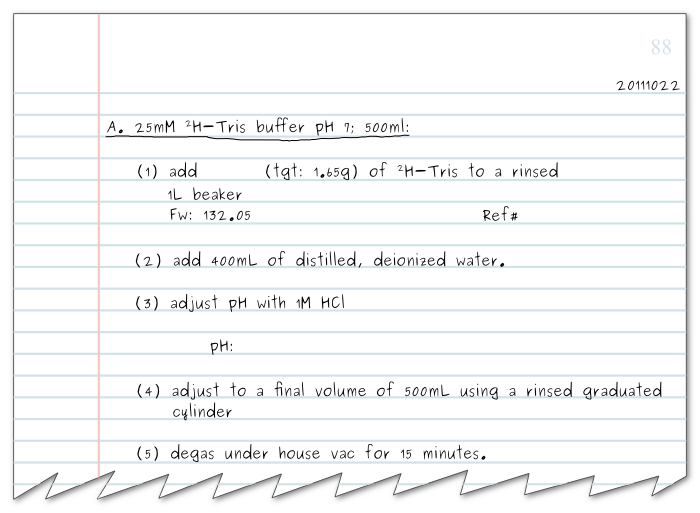 The notes, as written above, are prepared before an experiment, or during an experiment–but not after! The top right corner of every page begins with the current date in YYYYMMDD format. If the first project of the day begins in the middle of the page, the date is also inserted on the right-hand side of the line preceding the project title.

The first project begins with the project letter and a project title, both underlined. In this case, the type of buffer (25mM 2H-Tris pH 7) and the volume are included.

The first step involves adding a chemical–Tris, in this example. The target mass is indicated (tgt: 1.65g), the formula weight (Fw) and a space for the reference information. Subsequent steps list the remaining steps needed to finish the project. As the steps are completed, the blanks are filled-in. Alternatively, a little point or check can be marked to the left of each step number (not shown here). 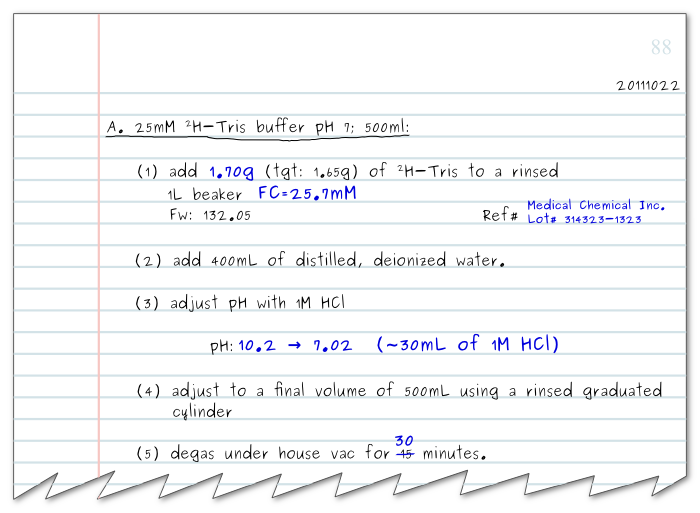 The exact mass of the Tris is inserted in step (1), and the supplier and lot number are inserted in the reference. Filling in the supplier information may seem pedantic at first, but writing in this simple line can and likely will save you countless hours and tears. It is used, first and foremost, to report the supplier of chemicals when writing up a manuscript, giving the actual suppliers of the chemicals used instead of guessing from the labels on the bottles from your shelves when writing. Importantly, however, the lot number can also be used to find bad batches of chemicals or contaminated reagents that have ruined a batch of experiments. When pinpointing a problem with contamination, finding the common denominator couldn’t be easier when the lot number is recorded for each chemical.

Step (3) records the adjustment in pH, taking note of the initial and final values, and the volume of acid needed. Keeping track of these details not only helps others follow your work, it can guide you in tracing possible problems with samples or methods. If, for example, the next time you prepared a 25mM Tris buffer the initial pH was 7, then you would know that something was amiss.

Finally, deviations in the protocol are noted in the space between the steps, and for this reason, it is useful to have plenty of space between steps. For step (5), the actual time to degas the buffer was 30 minutes. The correction was noted by striking through the tentative number, 15 minutes, with a single horizontal bar. The crossed values should remain completely legible so that others may see and repeat your original protocol. (Not to mention that sometimes it’s possible to make mistakes when marking mistakes.)

Here is another example which illustrates how referencing works–and a few new ideas. 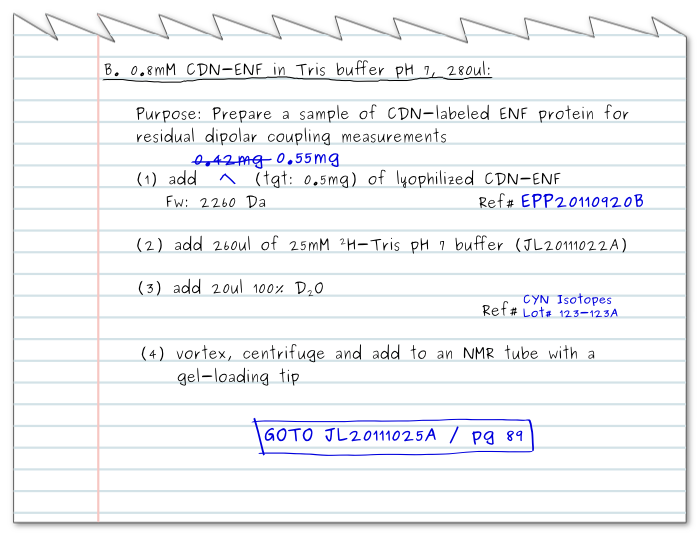 In this project, a protein sample is prepared for an experiment. After step (4), this sample is presumably used for NMR experiments–you would have to check the corresponding instrument notebook to find out. Subsequently, this sample has been used to make a new sample, which can be found in project JL20111025A (on page 89).

The GOTO statement indicates that the project continues onto another project, and it is useful for tracing the lineage of samples and experiments. GOTOs are used when a sample has been changed, or when an experiment has multiple steps that span multiple days. This GOTO statement makes use of both internal and external referencing.

The external reference format is used for identifying a project inside and outside of a notebook. It combines the experimentalist’s initials (JL), the date in YYYYMMDD format (20111025) and the project letter (A). External references are used to uniquely identify the project in other notebooks or sample tubes. Sometimes I will further specify the step number (i.e. JL20111025A-(4)) if the project is on-going or the sample comes from an earlier step in the project.

These can be used to help chain together projects with GOTO statements. Continuing from our example above, we’ve created a new project from JL20111022B. 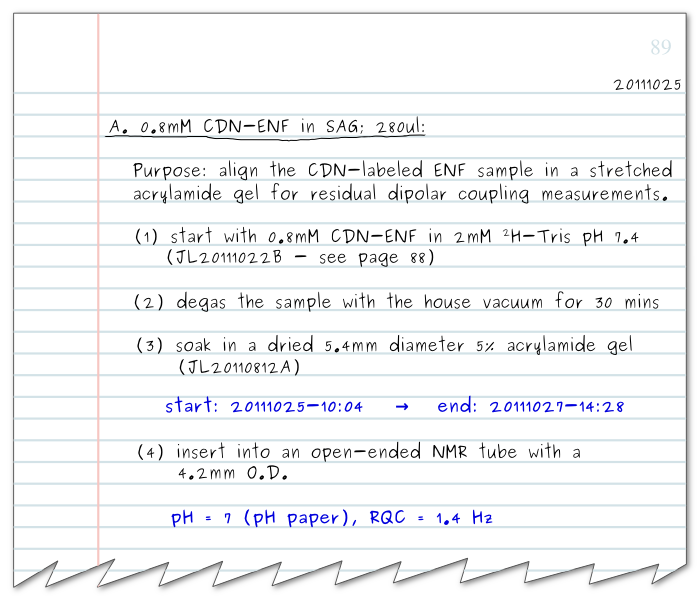 Note also that a statement of purpose has been included in this project. A statement of purpose or a justification of the choices you’ve made for individual steps in an experiment can give the reader useful cues and context; use these often, but be concise and direct in your remarks.