In this series on partially alignment samples for solution NMR, we explore the theory, methodology and analysis of residual dipolar couplings (RDCs) and residual anisotropic chemical shifts (RACSs) for the refinement of molecular structures and dynamics.

The state and homogeneity of the liquid crystal can be monitored from the partial alignment of deuterium (²H) spins. ²H spins are commonly used in NMR solvents for locking the rotating frame frequency. In this post, we discuss the impact of liquid crystals on the ²H spectra of a solvent, such as ²H₂O, and give recommendations on the proper shimming of liquid crystal samples.

RQC
Residual Quadrupolar Coupling. The magnitude of the small contribution of the partially alignmed quadrupolar coupling tensor. This value is proportional to the static quadrupolar coupling constant.
RQS
Residual Quadropolar Splitting. The magnitude of the splitting measured for a quadrupolar nucleus in a partially aligned sample. In contrast to the RQC, this value depends on the liquid crystal order parameter as well as the aligned orientation of the quadrupolar nucleus with respect to the liquid crystal.

Due to the large diamagnetic susceptibility of the liquid crystal, the crystals will become highly oriented in a magnetic field. Alignment can occur with the crystal long axis, named the director, colinear with the magnetic field (B0) or perpendicular to it, depending on the sign of the diamagnetic susceptibility of the liquid crystal.

In an aqueous solution, the solvent water molecules will hydrate the crystal and exchange rapidly between a crystal-bound state and the isotropic, bulk state. The alignment of a liquid crystal can be conveniently monitored from the ²H lock line of ²H₂O in the sample.

The ²H isotope has a magnetic spin quantum number of 1, and it has a static quadrupolar coupling equal to about 125kHz. The quadrupolar tensor is traceless, so for an isotropically tumbling ²H₂O molecule (or ²H¹HO molecule), the quadrupolar interaction is averaged to zero, and a single peak is observed. In the presence of a liquid crystal, ²H₂O molecules interact weakly with the crystal, and on average, they are partially aligned. This partial alignment introduces a splitting in the ²H spectrum of ²H₂O. 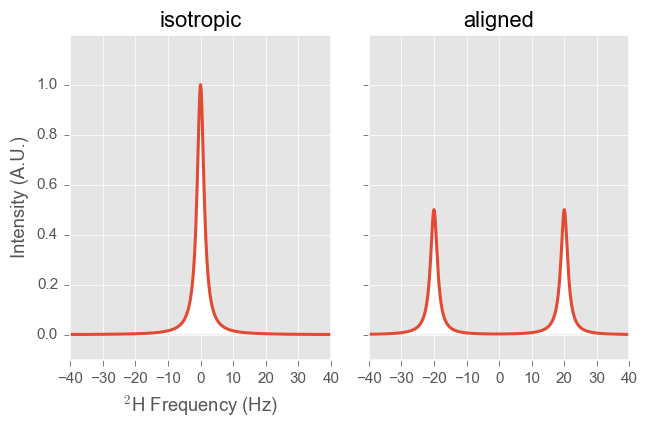 Molecules of ²H₂O exchange rapidly between the isotropic and bound states to produce a time and ensemble average residual quadrupolar splitting (RQS). In the above diagram, the splitting is roughly 40Hz, and the degree of alignment then is about 0.03%. Note that if ²H₂O molecules were exchanging slowly (sub-μs), then there would be a large isotropic peak and a splitting at 125kHz with an integrated intensity of 0.03% of the isotropic peak. 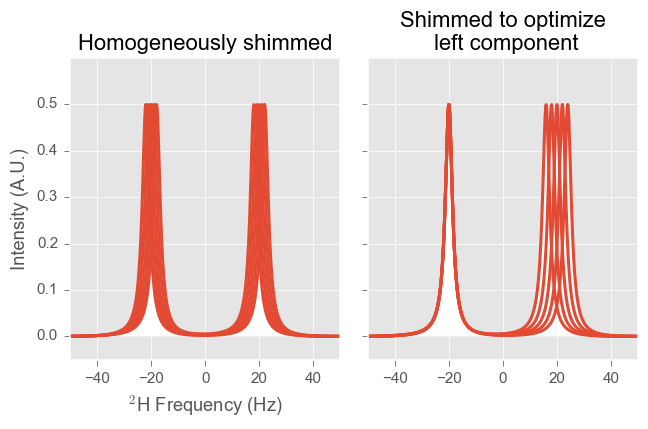 It is possible to shim this distribution in such a way that there is a shimmed B-field that follows the concentration gradient, thereby emphasizing one of the two peak components. Shimming the sample in this way is not desirable because it limits the precision of the measured coupling (and the RDC) to the broad component. For aligned samples, you’ll want to follow these guidelines: